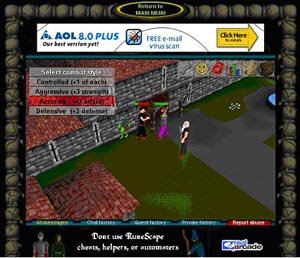 The last weeks have been dominated by a persistent question from our ten year old.
“Can I play Runescape?”
This is a multiplayer online game that takes you on quests and overland adventures using spells, magic and powers. You can earn gifts, money and in turn you have the opportunity to buy the things you require for your journey. It all seems harmless enough. But…..

We have read reviews and had discussions with our child and he in turn has asked friends why they play. The conclusion…..is well, we would be happy to have your help here. If you know of the game check it out and make a comment.

Some have likened it to Dungeons and Dragons. And I know there are some of you who read this who know what that is all about.

I suspect that there are other more general rules that one must have about screen time and general viewing and playing that informs one’s decision about Runescape.

Some have named it Run Escape. Do I want my child being pursued? Do I want them playing online games period? I found these reviews.
http://www.almenconi.com/reviews.php?art_id=591
http://www.commonsensemedia.org/website-reviews/Runescape.html
http://f1fe.com/blog/2004/03/22/runescape-review/
Let me know what you think.