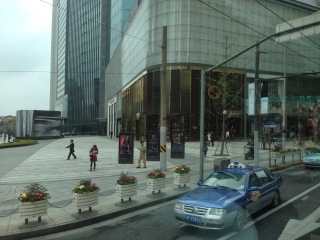 We arrived at Gaoyou middle school this evening.
I’m going to have to switch location services on and check on apple maps to see exactly where we are.  The bus trip from Shanghai took at least four hours.  We crossed the Yangtze river.
I spoke to my family while on the bus, using Skype and the $40 data SIM that I bought in Shanghai.  The roads were consistently superior to the roads between Melbourne and Hamilton.
What struck me most today was the absence of confronting poverty.  I’ve not travelled in Asia much, and not at all for 18 years.  On previous trips the poverty was confronting.  On this trip it is not.
There is still evidence of disparity in living standards, but I don’t think it’s any more striking than in Melbourne.  Travelling through the countryside this afternoon was more reminiscent of travelling through Europe than through Indonesia in the 1990s.  The population density is striking.  There are clusters of farm houses surrounded by small farming allotments. But the houses look sound and the farms appear fertile and tidy.
Every city is marked by dozens of high rise apartment buildings in construction phase.  Every waterway is full of working vessels transporting raw materials and goods.
And all of this was observed from a comfortable coach travelling fast on very, very smooth roads.
Is this really a foreign country.  Is this really China?
(There are giveaways.  I particularly enjoyed finding a well used ashtray in the non-smoking toilet cubicle of our hotel.  Subject matter for another journal entry, perhaps).