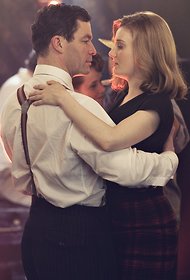 Did you watch the BBC The Hour when it aired in Australia recently? It is described as:

A behind-the-scenes drama and espionage thriller in Cold War-era England that centers on a journalist, a producer, and an anchorman for an investigative news programme.
It has seriously hooked us in, as we watch the Mad-Menesque show set in the bowels of the BBC film studios in the 50s. There are a few recognisable actors such as Anna Chancellor, Dominic West , Romola Garai and a new one for me, Ben Wishaw. If you want to read a critical review you can see what The New York times said here. I still have the last episode to see….cannot wait.